Born 1951 in Brwinów, a peaceful countryside near of Warsaw, Poland.

He never received a formal artistic education. He is believed to inherit his talents from his father – a talented painter, who’s works were exhibited even in Japan.

1972 Cichocki joins the legendary artist group "Niezależni" ("The Independents"). He exhibits a lot with the group and individually.

1978 - in regard of his works, past exhibitions and due to personal recommendations by the legends: Lidia Boniecka and Zdzisław Beksiński – the artist becomes a regular member of ZPAP (Visual Artists Association of Poland).

1981 Cichocki relocates to the Netherlands where he works on a series of paintings, inspired by The Arcanes of Tarrot and several other works for private collectors. (newspaper article)

The Netherlands period inspires the artist with the old Dutch masters’ craftsmanship and technique. Cichocki devotes himself entirely to this style, experimenting with sparse light and diverse objects.

1989 the artist returns to his generic place - Brwinów, Poland - where he lives and works until today.

Cichocki is neither a big speaker, nor an extensive exhibitor. He used to say:

"I am sort of a bystander – as well in my own life, as in the craftsmanship I carry out.

Do we really need to take part in those races, these exhibitions, working under pressure of the "modern art" kind-a-thing and the "avant-gardes" chasing you every decade? ...even if you have this "here & now approach" as the one and only sore possession?”

“If it would be possible I would better clean the garbage from the Vermeer's workshop, as to take part in this "monkey-business". I am not interested in the reviews and opinions: I do paint what I like and what I do best. Howgh!"

"I am getting older with the trees I planted myself half a century ago. But I am not going to outlive them and this is "the only-sure-thing" I know. And the paintings? I don't know..."

Art by this artist 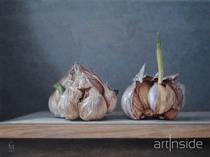